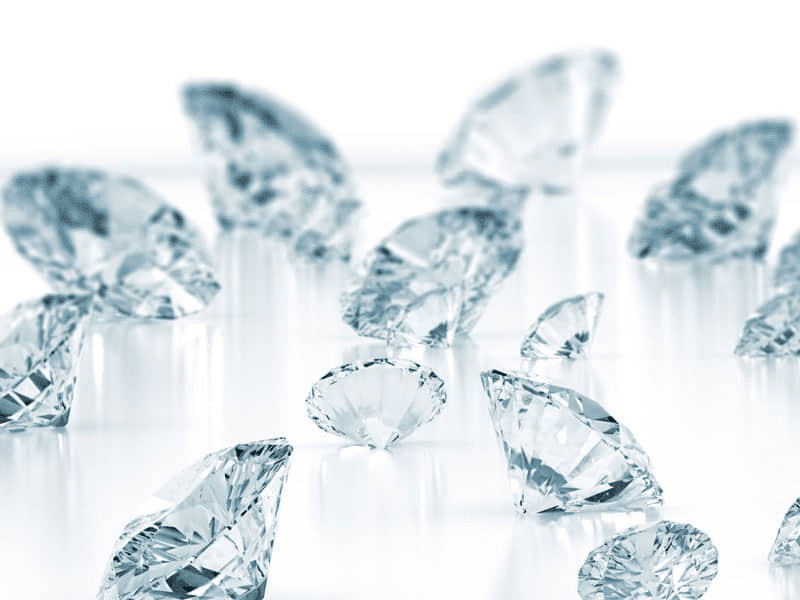 Gold is a yellow precious metal found in nature in a pure form. Because of its high ductility and malleability, it is alloyed with other metals for use in jewelry. The content of gold alloys is expressed in 24ths, called karats and the most used 18-karat alloy is 75 percent gold. The colour depends on the alloy composition, for example gold alloys with copper produce rose gold.

Diamond is the most extraordinary precious gemstone and the beautiful symbol of endless love. Its extreme hardness was well known in ancient times and its ancient Greek name adamas means invincible. Orsini diamonds are carefully selected according to the highest international quality standards and the code of ethics set up by the Kimberley Process Certification Scheme.
Each diamond is unique and eternal.

This mineral formed millions and millions of years ago deep within the earth. Due to the crystallization process of carbon, it is the hardest material in nature following the Mohs scale.
A diamond’s quality is classified and valued according to the popular 4Cs created by GIA (Gemo-logical Institute of America): Carat (peso), Clarity ( purezza), Colour (colore), Cut (taglio).

Weight is measured in carats (one carat equals 0.20 grams). Larger diamonds of the same quality are worth more per carat. However, such variation is not proportional as large rough diamonds are very rare.

Clarity identifies the presence or absence of internal or superficial imperfections. The aspect position, size and number of inclusions and blemishes are examined and graded under 10-power magnification. If diamonds are internally pure according to the European classification, as they don’t show any inclusion under 10-power magnification. At the lowest grade of the clarity scale, P (standing for the French piqué that means blemished) diamonds show eye-visible inclusions. The clarity rating of diamonds over 0.30 carat weight is based on a standard scale ranging from IF to P.

Diamond colour varies from colourless to black; a fancy diamond has a distinct body colour like pink, blue and green. In the GIA colour scale accepted by the IGI (Istituto Gemmologico Italiano) and the UNI Italian regulation as well, the letters D, E, F, G H correspond to colourless or near co-lourless diamonds. I, J, K, L colour diamonds are still included in the range of white, while the scale grades to Z are saturated (faint to light yellow).
Cut is the only diamond property requiring the human contribution. The proportion, symmetry and polish of a diamond’s facets determine the stone appearance and scintillation. The most commun brilliant cut has 57 facets (or 58 if the apex is faceted too). Diamond shapes can be round, oval, square, emerald, marquise, heart, pear.